He was named for a venerable Star Trek captain, a connection that was often presumed at the VA Hospital where we 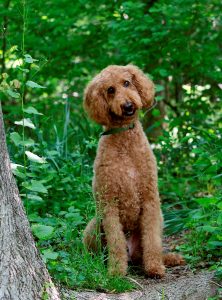 visited. At the nursing home we visited, one elderly resident persisted in calling him Luke John, noting that he was a Bible dog. The children at the elementary school who read to him were tickled at the sound of the French “J”. Jean-Luc happily responded to all, no matter what they called him. He could spot a smile a mile away and that would set his tail to wagging in delighted anticipation. And elicit smiles, he did. The intelligence and empathy in his eyes when he looked at you melted many hearts. He was certainly an integral member of our starship and with his loss we feel very much adrift.