I am well aware that a large number of pet owners think that their pets are the smartest, superiorly gifted and without a doubt the finest canine that ever smelled a fire hydrant. Well I’m here to tell you that of all the dogs that have crossed my path in the past 72 plus years, they don’t hold a candle to our dog Liberty. She was the most gifted of all I have known, and of course I am in no way prejudice in favor my wonderful gifted and superior dog who is the love of my life. She was destined to become a KPETS Therapy dog. 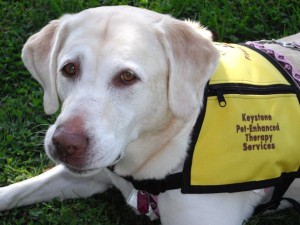 We adopted her about 9 ½ years ago when she was 3 years old. We recognized immediately her gentle demeanor and laid back ways when dealing with other animals and all humans. Upon her adoption into our family and continuing until she was called to the rainbow bridge, she never, and I mean never, counter surfed, got on any furniture, never had an accident in the house, never snarled and or growled at any person. She did on vary rare occasions give an alpha dog snarl to other dogs when, and only when provoked by them. 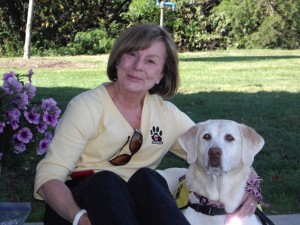 Because of these docile and gentile attributes we thought that she would be an ideal candidate to become a therapy dog. Therefore, with some trepidation on our part we brought her to the KPETS therapy dog tryouts one evening in Carlisle, PA. There were several other dogs in attendance along with the KPETS staff and instructors to make the initial evaluations. The evening went well with aluminum crutches being dropped and thrown on the hard floor behind the dogs to gauge their reaction; there was the walking around with the other dogs to see if that was a distraction; there was the wheelchair rolling around as well as a myriad of other people and dog interactions to test the reactions of the various candidates. All of this made us more than slightly anxious, but Liberty never flinched, and finally she just assumed her normal position of lying down on the floor and being oblivious to all of her surroundings. Her second trip to the home was just as successful when she visited with the residents. Here again she put her best paw forward and demonstrated her skill and ability in bringing out relaxing and soothing qualities in those with whom she came in contact with.

For the next number of years Liberty personified what a real therapy dog can, could, would and did do in the line of duty. She visited schools, brownie scout groups, nursing homes, YMCA children’s groups, regular weekly visits to the oncology department of the Holy Spirit Hospital, a regular at the Camp Hill, PA Fredrickson Libraries reading to the dogs programs and numerous other functions venues that put a smile on the participants faces. She had the ability without even trying to gladden the hearts of all who were privileged to come in contact with her. Both Jan and I took great pleasure in basking in the reflective glow of her accomplishments.

There were many outstand and memorable times accredited to this most wonderful canine and we would like to share just two of them for you. Our first was when we became involved with a young 8 year old girl named Sophia who was stricken Cerebral Palsy and was confined to a wheelchair. She attended our reading to the dogs program at the Fredrickson Library in Camp Hill and seemed to improve in all of her lifes’ struggles after her interactions with Liberty. For a period of time she stopped attending the library program and we missed her and were concerned by her absence. After a few months her mother wrote a letter to KPETS stating that Sophia did so well at the library program when she interacted with a dog named Liberty could she request private visits by Liberty in her home? Of course Jan and Liberty complied and this special bonding interaction grew between the parties. Labs are know for their reluctance at having their front paws touched and Liberty was no exception, except for Sophia. Finally, this relationship blossomed and Liberty was invited to visit Sophia’s school where the teachers, children and other staff members could witness first hand the positive therapeutic capabilities attributed to Liberty.

Another memorable encounter began when the YMCA in Camp Hill, PA invited Liberty to visit their preschool and kindergarten group on a regular basis. The staff at the Y requested a monthly visit by Liberty and we readily agreed. Also it should be noted that the parents were notified to ensure that that the interactions by the children with Liberty would not be detrimental. Several parents were skeptical because their child was fearful and or did not feel comfortable around animals. As we all know too well, children who have been fearful of dogs and others who had never been around animals soon became Liberty’s strongest supporters. When it became time at the end of each visit the children could come over to Liberty and pet, touch and feel at their hearts content. Who do we think did the most of all of this? Yes it was those who were most fearful at first. Photographs of Liberty adorned the classroom bulletin board and she was for all practical purposes a member of the class. In fact when it became time for the graduation ceremonies and the awarding of diplomas, Liberty marched up there and was awarded hers’ to thunderous cheers and applause of all in attendance.

She was the ambassador of love, life and good cheer to all who were lucky enough and or privileged to have known her. Just her presence was enough to lighten the load of any heavy heart. A touch of her soft ears or a look into those beautiful brown eyes would melt your troubles away. And yes, the never ending wag of tail would clear off a coffee table in a single swipe and cause a defensive pose of all grandchildren within striking range.

We were truly privileged to have had her in our family these past years. The cancer and other ailments associated with it just became too much for her to handle and she finally crossed over the rainbow bridge. She was the love of our life and we miss her terribly.

May God bless her be her new guardian,