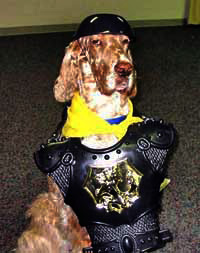 We all know too well that our best furry friends’ lives are not nearly long enough! And I regret to inform you that we’ve lost another dear dear therapy dog all too suddenly.

After spending the entire night at a local nursing home with her best friend Harmon to be with her terminally ill mother, Mimi Sigworth was on her way home on the morning of November 29. While driving, Harmon fell off the back seat. Mimi pulled over and got out to help him back up, but something was wrong. He wasn’t quite ‘there’. He was breathing but couldn’t help himself get back up. Mimi got back in the car and flew to PETS (Pet Emergency Treatment Services). But it was too late. Harmon had passed on the way there. He was only eight years old. The vets thought possibly a stroke or aneurysm had been the cause of death. I spoke with Dr. Sloyer about it later and he said it is rare this type of thing happens – maybe like 1 in 1000! Needless to say Mimi was devastated.

But this does not end here. Mimi was having a very hard time understanding why God would take her beloved Harmon when he had so much more to do as a therapy dog. Harmon was even serving God with Mimi in a ministry to teach people of God’s unconditional love. Why would God take him! She was trying so very hard to understand.

Several hours later Mimi’s mother passed away. She had been hanging on for days without eating and now, had finally let go.

Mimi called me the next day to let me know that she now knew why Harmon had to go. Her mother never really liked to do anything by herself. She was afraid. She always needed someone. She had been hanging on for some thing, some reason. Mimi was now at peace with Harmon’s departure. She could now understand God’s plan. Harmon was there to help her mother so she would not be alone when she passed on.

The thought of Harmon guiding her mother has given her some comfort. But the loss of these two most precious entities in one’s life in one day is so much to bear. But please remember Mimi and her husband Jack in your prayers.