I would like to thankBlu, Dizzy, Lola, and Eluas well as Jan,Laurie,Sharon and Lorain for their time and participation today.  Also, I would like to thank Meeko and you for your attendance and participation at the court orientation and interview stages.  Though they probably don’t realize it; their attendance in a courthouse to make these cold walls and strange people all over, seem a little more friendly and bearable when they have to talk about unspeakable events.

I will be sending a donation to KPet (on behalf of all the dogs involved in this particular case) as soon as we are done the trial.  It is expected to close next Tuesday.  I will also be sending personal acknowledgment of everyone’s help from myself and our State’s Attorney, Mr. Barnes, but I wanted to say thank you today.  It was a huge help and it went really well.  Thank you again!  Michelle 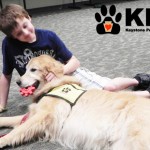 “My Golden Retriever, Hunter, and I joined KPETS over a year ago. Hunter is only two years old, but he has the demeanor of an “old soul”. This “Old Soul” has melted the hearts of many children at the Shrewsbury Library’s “Tales for Tails”.  There are moments when five children are reading five different books all at the same time. Some will show Hunter the pictures in the books. One little boy was very shy to read in front of his parents. They decided to walk around the library while the boy sat and rubbed Hunter’s belly. There was a dog book sitting on Hunter’s blanket. I told the little boy Hunter had just finished reading the book and if he liked, he could read it to Hunter. The boy was slow at picking up the book. As the boy read, he would stumble through some of the words. I asked him to show the word to Hunter. I would then put my ear to Hunter’s snout. I would then tell the boy the word. He was so impressed that Hunter “could read”. This encouraged him that he decided to get another book to read. When his parents returned to the reading area, they were thrilled by the sight of their shy son reading to Hunter. They kept thanking me for breaking the shyness and shell that was surrounding their son. One dog, one boy, one book, one magical moment is all it took.”

“While Chester, my golden retriever Pet Therapy dog, and I were walking down the hallway to our regular Pet Therapy appt. at Schreiber Pediatric Rehab, a speech therapist came out of her room and asked, “Excuse me, would you mind coming back to my room for a moment? I am working with a little girl, in all my time working with her I have never heard her speak a complete sentence, or be able to put words together. When you walked past my door she said, ‘Can I pet the dog?'” Well, of course I immediately turned around and went into her room with Chester. The little 10 year old girl was all smiles and so excited to pet the dog! While petting him she said, “I have a dog at home!” The therapist amazed, quietly spoke to me, “Sentence #2!” She asked the girl about her dog at home. The girl reached into her backpack, pulled out a stuffed doggie, kissed Chester with her stuffed doggie, and said, “This is my doggie!” The therapist looked my way and mouthed the words, “Sentence #3…” My eyes filled with tears, so privileged to be a part of this miracle-moment.  What a difference Pet Therapy can make in the life of a child, an adult, whoever could benefit from the unconditional love and the tail wag of a furry friend.” 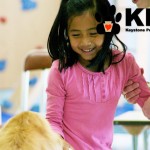 “Meeko and I were doing our regular visit with a small class at a school. Our visit went really well and the students had a great time working and visiting with Meeko. That was awesome enough. Meeko is truly turning into a fantastic little therapy dog. He may only weigh 6lbs, but he really has a big heart for kids and just seems to know who needs a little extra therapy at times.

We had finished our classroom visit, exited the room and were making our way down the hall to leave when we came upon a student and a staff member sitting in the hall. Meeko immediately went to this student, I asked the staff member if it was okay, noting that it appeared the student had been crying. He nodded and the student asked if he could hold Meeko. I said certainly, and placed Meeko in his lap. Meeko looked up and began licking this child’s tears. The child began smiling and talking to Meeko. He had Meeko do a few tricks, sat on the floor and played with him for a couple of minutes, got up turned to me, smiled and ran off into the classroom.

I looked at the staff member sitting on the chair who had been with this student, obviously consoling this child. He looked at me in wonder and said, “That was the most amazing thing I ever saw.” He proceeded to tell me that there was speaker in the class talking about smoking and the effects of it. This student’s mother had just been diagnosed with lung cancer from smoking. He had become upset when they began talking about it in class. The staff member said he had been trying to console him for about 20 minutes, but was unable to. He said he had never seen anything like that happen before. I smiled and said that is the magic of pet therapy. We peeked in on the child in the classroom before we left, he looked back with the biggest smile ever, gave us two thumbs up. I returned the thumbs up, smiled and winked, then as we turned and made our way down the hall, I thought, “Isn’t it amazing how our dogs just know what to do?” I am so proud of Meeko. He will forever be the Chihuahua that touched the lives of so many children. The little dog with a big heart!”