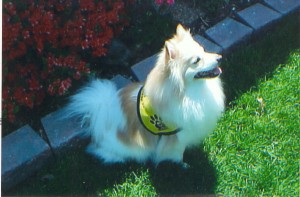 Although my husband and I have always had animals, it had been almost 10 years since we had our last dog. I wasn’t ready to get another one but with the death of my mother in February 2006 and the void in my life, when we saw Buddy at a Pet Smart back in June 2006, I instantly fell in love with him. My husband was a little apprehensive because we had always had big dogs. We knew Buddy had some health issues and was extremely shy of men because of his abusive background but we decided to take the chance. His foster mom, Kim, had named him Buddy and requested that we keep that name. We already had a cat named Buddy so we decided to name him Buddy Bear.

I can’t begin to tell you how much this little “angel” has affected our lives. He soon became very well adjusted to his new home and although our three cats weren’t exactly thrilled with him, at least they did tolerate one another. We managed to get most of his health issues under control and we are proud to say that he became a Registered Pet Therapy Dog with KPETS (Keystone Pet Enhanced Therapy Services) and also passed his AKC Canine Good Citizens Award. He brought so much love and joy into our lives as well as all the lives he touched with his therapy work.

Thanks to both Kim (his foster mom) and Christy(Furry Friends Network) who insisted that we wait to see Buddy Bear that day in June 2006. He was a real joy in the short time he was with us. Thank you all for the work that you do to provide these animals a new start in life.

We had him less than 3 1/2 years. He became ill early December of 2009 and was diagnosed with an immune deficiency disorder called IMHA. We tried to save him but he continued to go “down hill” and we decided to let him go on December 26, 2009. He was only seven years old. We were devastated and miss him so much. There will never be a dog like him.
Rest in peace, Buddy Bear. We’ll be reunited in Heaven one of these days.