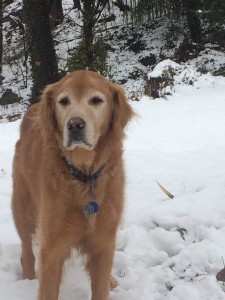 On Saturday April 14, 2007, my husband and I went to the Humane League of Lancaster County for a third time in hopes of finding a furry child to bring home. I had never had a dog before, so my husband stressed the importance of being more than 100% sure and ready. Everyone always says you’ll just know when you see your dog and when we saw Poz walking in the door to the Humane League, it was immediate. This beautiful red golden retriever walked towards us, tail wagging and we took “Gilbert” to a room to spend time with him and he immediately came over to me and nudged my hand, I was in love. We adopted “Gilbert” who came in as a stray and renamed him Poz after Penn State Football player Paul “Poz” Posluszny.

I found out about KPETS when Karen came to LGH to give a presentation to the therapy department where I worked as an Occupational Therapist, and I immediately thought Poz would be so great at this! He quickly passed and received his KPETs registration. We had so much fun sharing our amazing “son” with everyone. His gentle disposition when his vest was on, nudging to be petted and sitting calmly to running around when the vest came off. 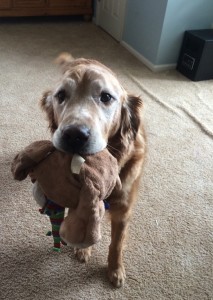 Poz became a big brother in March 2009 to a human sister and protected her like no other. We had never heard Poz bark until Rachel came home and whenever anyone came to the door he barked and always followed who ever was holding her, even coming to us and then running to her room if she was crying. Once his second human sister was born in August 2011, we took a break from KPETS to spend time with our family.  How Poz’s sisters loved him and told everyone about their big brother, Poz. He put up with being covered up in baby blankets, dressed up for Halloween, used as a horse (the girls would try to climb on his back) and never once growled. Poz was just a one in a million Golden, I still to this day cannot believe he was a stray, but I thank God for bringing Poz to us.

We had to make the heart breaking decision on March 16th after suffering 2 big seizures from a brain tumor, to let Poz cross the rainbow bridge. The hole in our heart is huge from the love we have for Poz. It was amazing how many lives he touched. Thank you to KPETs for giving us the chance to share our furry child, our Bubba Man, Poz with so many.  Run free Poz, we love you. 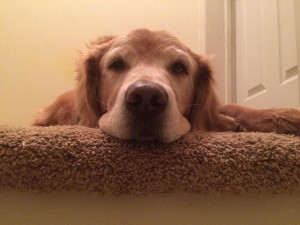