It is sad news to inform you that another first original KPETS therapy dog has completed her journey her with us. Carol and Bill Hopwood asked that we set up a memorial page with a place where Maggie’s friends can donate in her memory to KPETS. www.kpets.org/maggie.html.

Here is Maggie’s story – in her ‘own’ words 🙂 So many of us miss you, dear Maggie! 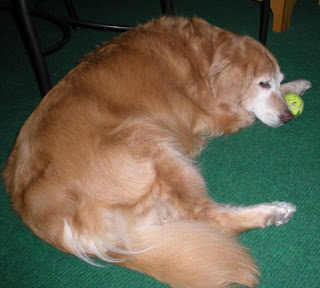 WORK AND THE BALL


Would you believe I was the 3rd choice? Mom (human) and Dad (human) selected one of my sisters but Marlene (breeder) said no due to an eye problem. Then they picked out another pup and took it home, thinking it was a girl. Later that night Marlene, very chagrined, called and said that she was a he. Marlene got in her car in Maryland and an hour later, I replaced #2- the “he” pup. Mom and Dad almost didn’t want to part with #2 but Marlene insisted that she was sure that I was a girl. So that’s how I began my life on Woodshead on February 24, 2001. I was one of 8 pups born to Sari and Jake on January 4, 2001. 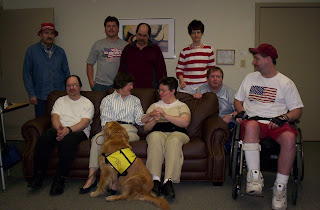 I was 9lbs. when I got there but by November, I weighed 64lbs.. So this is my story. Those early months were filled with a lot of playtime and love from Mom and Dad and their friends. Somewhere in that time, I played with a lot of toys–bones and other things– but the first time I saw a “tennis ball” roll my way, I was hooked. It was so much fun to chase it and bring it back, but I wouldn’t release it without a tussle. So my obsession with the ball began and remained until the end.Early on, Mom recognized that I was smart and that I liked all kinds of humans (dogs were okay) so she began to take me to training classes. Then I advanced to therapy training and was approved by the Delta Society. It was a “piece of cake”(or biscuit). Mom said I was WORKING whenever I visited humans but it wasn’t hard at all. Then Mom met Karen (who runs KPETS) and Mom thought I could be approved by them. I did and was then able to proudly wear a KPETS vest for visits to humans. I first visited Brethren Village residents–they loved me. Then Mom and I started to visit the clients at Acadia Rehab Center. We were the first team to start dog therapy there and did it weekly for four years. The clients would brush my fur and hide the ball but I always found it. They learned my name-Maggie; but couldn’t remember the therapist’s name. Guess what- it was Maggie too! 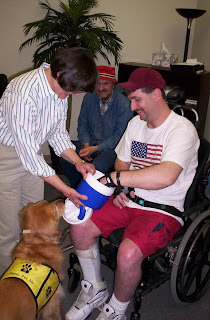 Since the time when I was a pup, Mom and Dad took me to the Senior Center to greet the seniors before we delivered the Meals on Wheels. The Center also had a ball! I even donated blood when I was young at the clinic at University of PA – it didn’t hurt. We visited Oak Leaf Manor residents and even attended church services there. We visited Miss Dolly at Woodcrest Villa, then at Oak Leaf and then at St. Anne’s. Miss Dolly said I was “pathetic”, but she sure liked to pet me. After all, she is 103 years young.


I also worked at reading classes for kids at the Mountville Library. That was easy. Mom also took me to the Knit-Wit meetings. The ladies talked and knitted and talked and talked and I usually slept. Father Stephen usually said hello and he blessed me many times at church services. I also visited Dad’s brother in New York; he loved dogs, so of course, I was welcome. I attended the United Day of Caring with Mom for many years usually at Conestoga View. I visited Moravian Manor and the Mennonite Home to see humans. Only Miss Dolly said I was “pathetic” but I knew it was a compliment. 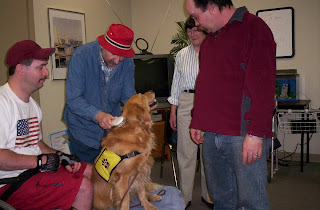 My Mom sometimes dressed me in a costume especially at Halloween. I was a Dallas cowgirl but Dad and human brother Doug didn’t like it so they insisted I dress as a Steelers. That KPETS human Karen even made me a “poster child” with other dogs on a brochure.
So my working life was not that hard. Mom called it work but I certainly liked it when the humans would pet me, especially when they scratched my nose or ears. And if they had a ball, that was the best.
Now I’d like to talk about my non-working life at Woodshead and the things and times I liked the best. I liked to sleep late in the morning on the rug at the foot of their bed. Dad would try to rouse me but I would “play tired” and make him stretch my legs before I would arise. Sometimes Mom would cover me with the edge of the bedspread but I wouldn’t move until they told me that I had to pee and poop (outside). Then I insisted on a handful of cereal before I ate my kibble. 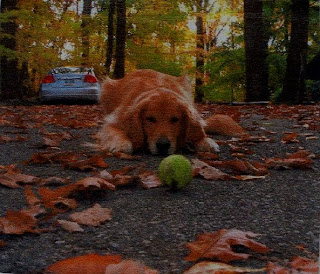 After breakfast, I was interested in the ball, always and forever. Dad seemed to have an endless supply of tennis balls. It’s good that he did because they got a little slimy and dirty when I would retrieve them from the woods. I loved it when Dad or Doug would throw it far when I wasn’t looking. Then I would do circles until I sniffed it and brought it back. Doug could throw it much further than Dad. Then I learned how to catch it off the garage roof. When I caught it (7 out of 10 times on a good day), I’d chew it for awhile before releasing it. They couldn’t pull it from my mouth unless I let them. I could even bark with the ball in my mouth but it wasn’t very impressive. I also liked to roll on my back and try to roll on the ball.


Boy, did I like it when it snowed! Chasing the ball in the snow was great fun. I sometimes needed directional signals to find it because it didn’t make a big hole in the snow. When we got a big snow, I had a little trouble doing #1 or #2 because I wasn’t that tall. After fun in the snow I loved to dry out in front of their woodstove.


Then there were the daily “Happy Hour” sessions at 5PM which Mom and Dad called “attitude adjustment”. Mom and Dad got their scotch and SC and I got my Maggie-sized (small) ice cubes. After the cubes, I was treated to some cut-up vegetables. In good weather we had “Happy Hour” on the deck. If I was good (95% of the time), I got an extra treat- a scotch-flavored cube. One time they gave me a Hammond’s pretzel and I was hooked. When Doug came over, he would tease me by placing a Hammond’s just out of my reach; but he would eventually give in when I gave him my “pathetic” look. When on the deck, once in a while, I would lift my nose and smell the scent of a deer or turkey. Mom and Dad eventually caught on when my tail was straight up.
I loved that house and the woods– I never once ran away. There was no need to do so- everything I wanted was there except the squirrels. I never caught one though I tried-didn’t even come close. I was not a “happy camper” when the wind picked up before a storm. I could always tell when they were coming-something like a sixth dog sense. Thunder and lightning was the worst– I couldn’t stop shaking. That’s when I received extra attention from Mom and Dad. They even bought me a “thunder shirt” to wear but it was no use. We “gutted it out” together in a corner. I also did not like to go to Terri, the groomer. I resisted but they insisted. I have to admit that I looked prettier after the four-hour ordeal. 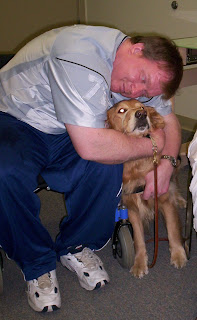 As I got older, my joints started to hurt and I limped sometimes. Sometimes Mom would give me some medication to help. I also developed some lumps on my body and the fur on my nose turned almost all gray, just like Dad’s hair. But my intelligence never faded and I learned to tolerate pain.
I really never wanted to be away from humans especially Mom, Dad, and Doug. I even liked to visit the neighbor lady and neighbor man when Mom and Dad were away for short periods of time. Mom and Dad even took me on their last vacation.


To please my parents, I walked their treadmill whenever they insisted. One time, I did it for 26 minutes non-stop. They had a big issue over my “bathroom” habits. They expected me to do #2 at least 3-4 times a day so sometimes I just faked it. I know Dad was jealous of my abilities in this area. I always knew my commands-sit, down, stay, come, etc. but sometimes I would make them repeat it two or three times before I obeyed. Mom even thought I could shake my right or left paw on command, but I would keep doing either one until she smiled. I would even let Mom brush my teeth once a week. I could even run through Mom’s flower beds with minimum damage. I did have trouble sliding down the driveway when it was icy. I used to sit under the counter next to their stools when they ate for two reasons: sometimes a crumb would fall, and to reassure them I was close. I could produce a low growl when something was amiss and I barked at all cars coming up the drive way.


My second favorite toy after the ball was the “sock” which was really a rubber pull. Dad and I played with it until he got tired. Dad always said I had a soft bite– I really didn’t want to hurt him.


So that pretty much covers my personal life. Nighttime was good because I got five Milk bones before retiring. Then I would settle down and give them a big sigh and they knew I was ready to sleep. Once in a while, my dreams became active and noisy – I was just hunting for my ball.
I lived a good life and enjoyed myself. I think I helped a lot of those humans I met along the way. I know that I helped my Mom, Dad and brother Doug. They sometimes got mad at me but when I blinked my long eye lashes and raised my paw to them, they forgave me.


My last day, I played with my ball a lot. I even carried it into the room at the Vet’s and I didn’t release it until the end.
Love, Maggie August 8, 2011