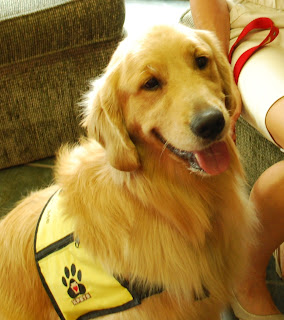 Max came to do a speech therapy session with Jeffrey who is 5 years old and has Autism.  We stayed in the Activities of Daily Living room since it was so hot outside for man and dog that day! Jeffrey has been a child who has an extremely difficult time attending to anything for more than a minute, especially if it is not something on his agenda.
As a speech therapist, I have been working on just getting him to have joint attention with me on an activity.  I was hoping the dog might help with this! Also, Jeffery has words, but he uses them mostly by imitating what others tell him to say, and even then, sometime he does not like to do so. I had some pictures made up of things Jeffrey could choose to do with Max.  I presented choices a couple of different times, and Jeffrey did an excellent job of looking at each picture and pointing to a choice.  He chose to “throw ball” for Max over “shake hands.”  We worked on turn-taking with throwing the ball.
At first, Jeffrey needed just a little help to throw the ball (he liked to just give the ball to Max and Max happily took it out of his hand J), but eventually, he threw the ball for Max! Another awesome thing he did after a few turns, was when it was my turn, he ended up with the ball in his hands. And before I could say that it was my turn, he handed it over to me!!
He loved it when Max would go after the ball.  Then, I prompted him to say, “Come” to Max to get him to come back to us. Jeffrey sat with his TSS (behavior aide) most of the time, but his attention to the dog and to me was really good! Once, spontaneously, he said, “My turn to go” real quick.  Then, we would take a break and either brush Max or pet him, or he could “border” the room (walk around the perimeter of the room looking at the angles of things) once and return to Max and us.
Then, I gave him another choice, “shake hands” or “take walk”;  he chose to take a walk with Max.  We did a couple of loops around the building (inside) with Max, and Jeffrey did such a nice job holding onto Max’s leash (typically, he needs his hand held tightly or he bolts away from whomever is walking with him). He held my hand, too, at times, but I tried to let go to see if he would stay with our group just by holding onto Max. We had one little “detour” from Jeffrey when we got near the playground door the second time.  But, I was able to run after him, and redirect him by saying “Where is Max? We have to get Max.”

We also stopped once or twice and told Max to “Sit,”. It was so funny, because Max wouldn’t sit the one time and Jeffrey gently pushed down on him to make him sit J

I found it interesting that as we said “Bye” to Max, we all shook Max’s “hand,” but Jeffrey didn’t want to, and he pet Max on the back instead, which remained consistent with his earlier choices when he chose the other activities with Max over “shake hands” each time.

Overall, I was very pleased with the session and hope to have Max again during a speech session. I saw more joint attention, turn-taking, and heard more words from jeffrey than I have in most of my sessions the past 2-3 months!