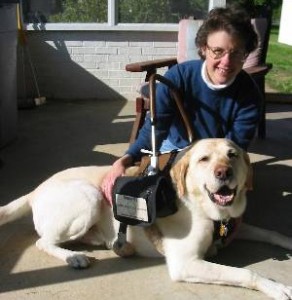 Huckleberry was born on November 7th 1997 and was raised by the Koon family in East Petersburg.  During the summer of 2000 he was placed with Nancy and from that moment on they became one of NLAD’s most successful teams.  Not only were Nancy and Huck recognized and welcomed every where they went but they were also the inspiration for our “Dream Ride” fundraiser that we have been doing for the past four years.  Scott, Nancy’s husband formed the first “dream team” to ride and raise money for UDS/NLAD.  Last year because of other obligations Scott passed the reigns over to Tom Barron who has continued to organize the ride.  This year’s “ride” will be dedicated to the memory of Huckleberry.

Huckleberry was devoted to Nancy and making her life easier.  In the early years he provided balance to assist her with walking, along with retrieving and carrying many items for her.  It was not uncommon to see Huckleberry carrying groceries from the store to the car and from the car into the house.  Huck did not stop with the “light” groceries either.  No matter how heavy that “laundry detergent” was he was up to the task and would not ALLOW Nancy to carry it by herself.  He was very protective of her and if Nancy was having a “bad day” Huckleberry all but insisted that she take it easy.

Nancy in turn, took very good care of Huck!  No job went “unpaid.”  The little treat bag hanging from her belt loop was never empty despite Huckleberry’s attempts to “clean her out.”   If Huck had so much as a sniffle, Nancy was on the phone with NLAD and the vet.  You could always tell, just by looking at Huck, that she spent a lot of time grooming and pampering him.  NO DOG EVER HAD IT SO GOOD!

Huckleberry’s final moment was spent rushing to Nancy’s side.  After spending the entire day on his bed, barely able to move, Nancy decided it was time to take him to the vet.  She went outside to ask a neighbor to help her load him into the car.  When she returned Huck jumped up from his bed and RAN to her…a moment later he was gone.

I know that we will all miss Huckleberry and we’ll all feel the void, but none of us so much as Nancy and Scott.  I know that many of you know Nancy and if you would like her mailing address to send her a personal note please contact me and I can give it to you.

Good bye Huckleberry…You were a faithful friend and we will all miss you!!