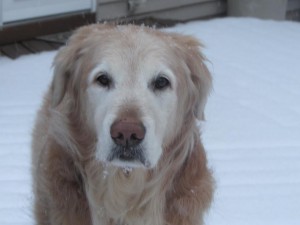 We were a KPETS team for 7 years.  For the past six years, once a week, Cashel went to ACADIA and worked with one of their clients. One of the therapists wrote the article below for the ACADIA newsletter. ~ Nancy Houston

Human Animal Bond is Strong for James and Cashel. 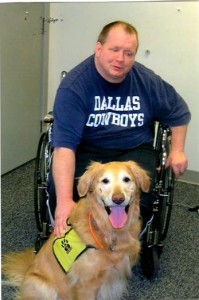 Cashel with his best friend James.

Those of you who have seen Cashel arrive for his animal–assisted therapy (AAT) sessions with James have seen one very excited dog!  He whines and lurches in agony to get down the hall as quickly as he can with only one thing in mind.  What’s that? Now what, but who? … his best buddy, James. James and Cashel began working together for their AAT sessions in March of 2006, when Nancy Houston of KPETS began bringing Cashel to see James.  Cashel was matched with James because I was looking for an active dog who would enjoy keeping busy and would like a lot of stimulation.  Cashel is a very active dog who was bored with the nursing home routine.  As it turned out, James and Cashel were the perfect match!

Each week, Cashel waits anxiously in the waiting area, while James prepares for his session. When I greet Nancy and Cashel, Cashel springs into action. He attempts to drag Nancy down the hall, knowing just where to go, desperate to get to his buddy.  After entering the room and gleefully greeting James, he is able to calm down and get to business.  He and James spend some time playing catch, practicing verbal and hand commands. (He’s learned a few from James!)  James brushes Cashel and Cashel may receive a treat or two from James. James works on moderating his voice volume (he’s deaf, so this is difficult) practicing wheel chair safety, and general social skills. Although he can’t say it with words, we’re pretty sure James is Cashel’s best friend.  In addition to Cashel’s other wonderful qualities, James loves that his name is Irish – Cashel is named after a city in Ireland as is his brother, Gilly (McGillicutty), who visits James on occasion.  James and Cashel are a lot alike – Irish names, a little wild and very social – in fact, we’re pretty sure that if James was a dog he would be Cashel.

I asked James what his favorite thing is about Cashel and he replied, “When his paws go down like a Marine.”  When James signals Cashel to drop, with his hand, Cashel drops very fast like the athlete that he is.

Thank you, Nancy, Cashel and KPETS for being there for James.